Note:  Acknowledgement is made here of the information on this page, which comes from the very interesting website of Regeneration International – Cool the Planet, Feed the World at https://regenerationinternational.org/ .

Regenerative, climate smart organic agriculture could actually help save the planet from climate devastation. As the reality of global climate change continues to sink in – scientists – activists – and lawmakers all across the world are working to find new ways to fight back against greenhouse gas emissions before it is too late.

Regenerative Agriculture describes farming and grazing practices which, among other benefits, reverse climate change by rebuilding soil organic matter and by restoring degraded soil biodiversity – resulting in both carbon draw-down from the atmosphere and in improving the water cycle.

“Regenerative Agriculture is a system of farming principles and practices that increases biodiversity, enriches soils, improves watersheds, and enhances ecosystem services. It aims to capture carbon in the soil and aboveground biomass (plants), reversing current global trends of atmospheric accumulation and climate change. At the same time, it offers increased yields, resilience to climate instability, and higher health and vitality for farming and ranching communities.” www.terra-genesis.com

This video explains briefly what Climate-Smart agriculture is.

Organic farming can remove the excess of the Carbon Dioxide in the atmosphere by drawing it down into the soil. In contrast, industrial (chemical) agriculture has the opposite effect and contributes to climate change by sending carbon into the atmosphere. By means of a switch to simple, regenerative, organic farming practices mankind could sequester more than 100% of current annual CO2 emissions.

How serious is the situation regarding the level of carbon dioxide in the atmosphere? This article called UN Says Climate Genocide Is Coming. It’s Actually Worse Than That. gives a good idea of the seriousness and is based on a report called Global Warming Of 1.5 °C made in October 2018 by the Intergovernmental Panel on Climate Change of the United Nations.

Organic farming techniques, such as restoring the soil’s microbial life with compost; growing cover crops to keep the soil covered between cash crops and to increase the soil’s organic matter; growing companion crops; and mulching the soil to keep it covered; keep the soil covered and regenerate the soil’s microbial life and fertility. These techniques reduce the temperature of the soil and enable the soil to remove many tonnes of carbon dioxide from the atmosphere continuously.

How Does Bio-Plant Fit In?

Bio-Plant fits into climate-smart, regenerative agriculture because farmers can use it in all of the climate-smart practices above. It makes rich compost which restores the soil’s microbial life, and thereby enables the soil to draw down more and more carbon dioxide from the atmosphere. Bio-Plant can also be used in organic farming techniques to cover the soil, to reduce the soil’s temperature, and to keep moisture in the soil. See the section below called A Global Shift to Regenerative Agriculture Can: for some of the benefits of using Bio-Plant throughout a country in climate-smart, regenerative agriculture.

Why is Regenerative Agriculture Needed?

Industrial, chemical agriculture is a very major contributor to global warming. In this video interview, The Industrial Agricultural System is Limiting Food Access and Driving Climate Change, Kirtana Chandraeskaran of Friends of the Earth International explains why the UN Conference on World Food Security in 2016 stopped short of recognizing that the industrial food sector is the greatest agricultural contributor to climate change. In short, it is because of vested interests and effective persuasion.

The loss of the world’s fertile soil and biodiversity, along with the loss of indigenous seeds and knowledge, pose a mortal threat to mankind’s future survival. According to soil scientists at the United Nations Food and Agriculture Organization, at current rates of soil destruction (i.e. decarbonization, erosion, desertification, chemical pollution), within 60 years we will not only suffer serious damage to public health due to a qualitatively degraded food supply characterized by diminished nutrition and loss of important trace minerals, but we will also literally no longer have enough arable topsoil to feed ourselves. George Monbiot: “We have sixty years of harvest left”

Without protecting and regenerating the soil on our 4 billion acres of cultivated farmland, 8 billion acres of pastureland, and 10 billion acres of forest land, it will be impossible to feed the world, keep global warming below 2 degrees Celsius, or halt the loss of biodiversity.

How Does Regenerative Agriculture Work?

The key to regenerative agriculture is that it not only does no harm to the land but actually improves it, using technologies that regenerate and revitalize the soil and the environment. Regenerative agriculture leads to healthy soil, capable of producing high quality, nutrient dense food while simultaneously improving, rather than degrading land, and ultimately leading to productive farms and healthy communities and economies. It is a dynamic and holistic, incorporating permaculture and organic farming practices, including conservation tillage, cover crops, crop rotation, composting, mobile animal shelters and pasture cropping, to increase food production, farmers’ income and especially, topsoil.

A Sprinkle Of Compost Helps Rangeland Lock Up Carbon

The article is about a compost experiment that began in 20017 on a Marin County ranch in the USA, and which uncovered a disarmingly simple and benign way to remove carbon dioxide from the air, namely by spreading compost on degraded grazing land soil. It holds the potential to turn the vast rangeland of California and the world into a weapon against climate change.

A Global Shift to Regenerative Agriculture Can:

In his Keynote: The Great Challenge: Farming, Food and Climate Change at the 2014 New York Times Food for Tomorrow Conference Michael Pollan makes the point that the world has no choice but to change to organic farming. There are two faces of the climate-food system connection: how food is a key driver of climate change, responsible for between 20–30 % of greenhouse gases, and then the very hopeful research on how changes in agriculture hold the potential not just to mitigate these impacts, but to actually help remove carbon from the atmosphere in large quantities. From the 2014 New York Times Food for Tomorrow Conference.

Other Videos About How Regenerative Agriculture Can Reduce Climate Change

Soil health determines plant health, animal health, human health, ecosystem health, and even the health of the economy – we can’t say this enough!

Unfortunately, most of our farming practices damage the health of the soil over time and create serious problems for humanity. In order to sort out our issues, we must admit to our own human faults…publicly. Soil, we’ve wronged you by utilizing A LOT of degenerative agricultural processes.

In order to achieve our goal of REGENERATION, we need to take a close, comparative look at current regenerative and degenerative agricultural practices currently happening around the world. We’ll start with the truth behind those nice clean rows of tilled soil. 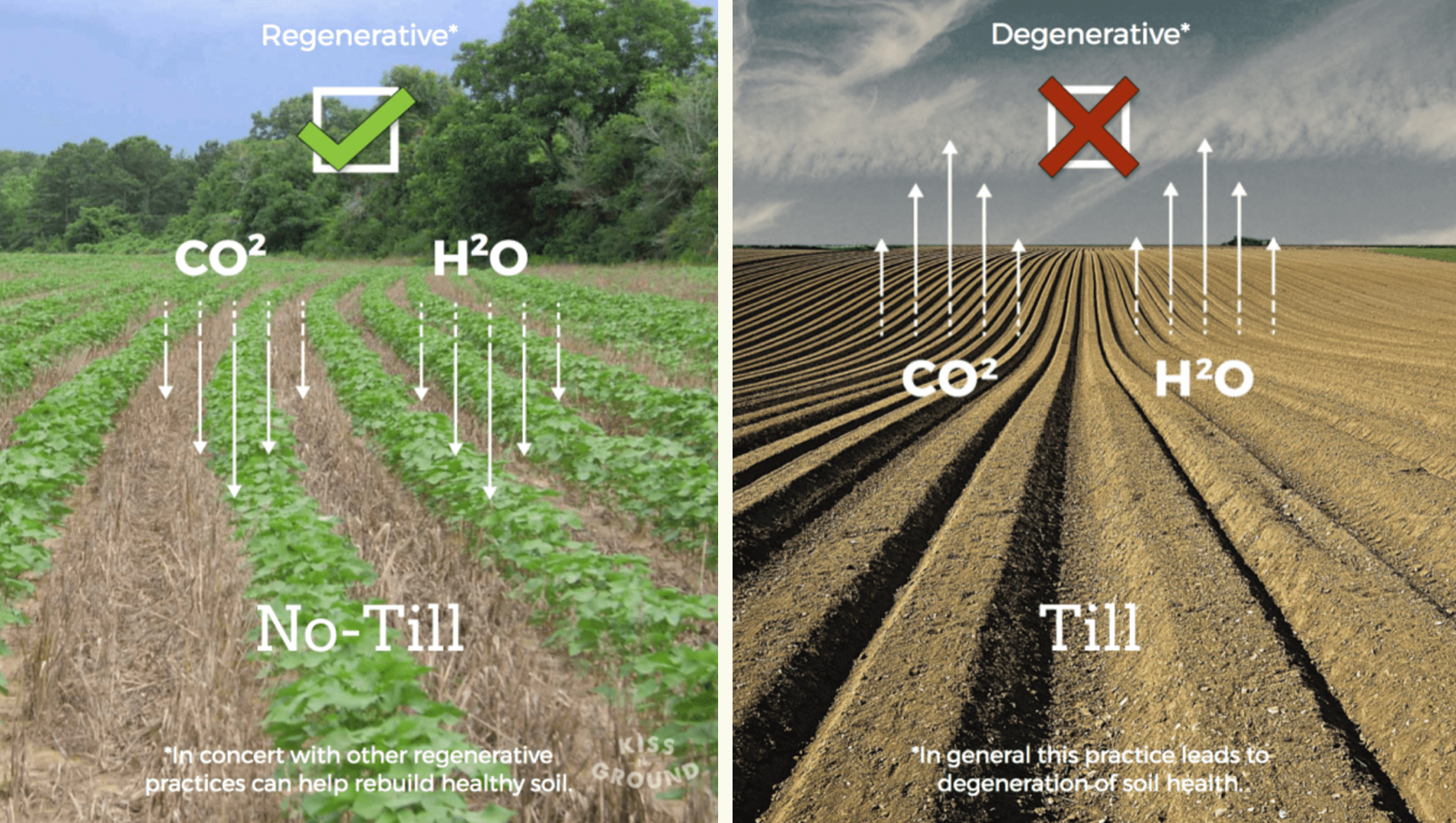 We often see tilled soil and think, “that is just what farming is, it actually looks kinda nice in those neat rows” and we may have been told that there are benefits to tilling like decreasing weeds or loosening the soil or increasing aeration. However, there are serious downsides to tillage that wreak havoc on the entire soil ecosystem, reduce its carbon storage, and its ability to regenerate itself.

No-Till:
This means that the farmer has left the prior crop’s residue and/or the mass of plants on the soil surface, along with the roots still in the ground and planted the new crop directly into the soil without tilling.

Tilling:
Is the process of turning over and breaking up the soil. 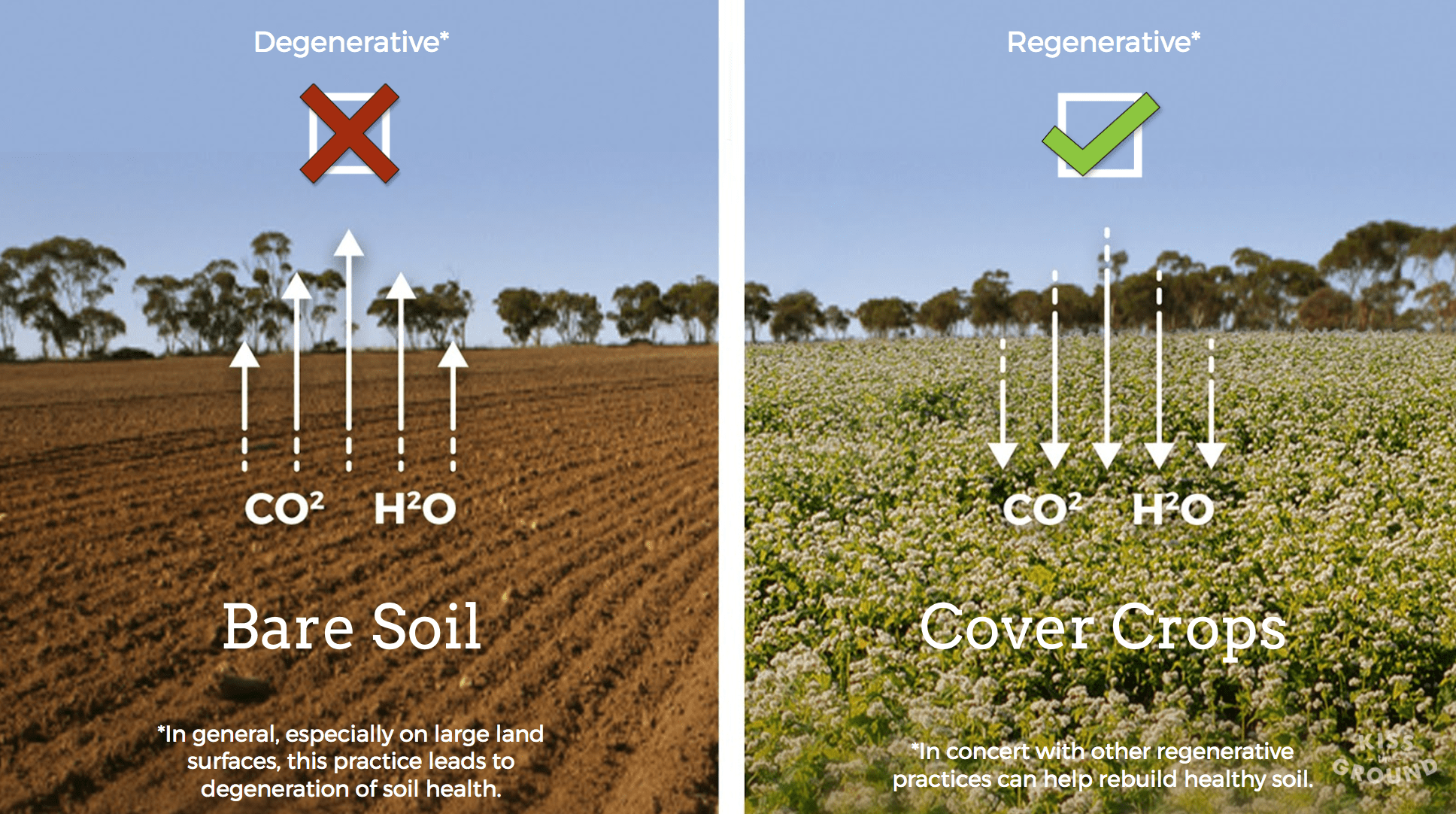 Mother nature is modest, she doesn’t like to be left naked. Seeing miles of bare soil is a common occurrence in the modern era. Whether driving down the road or flying in a plane, we often experience bare fields as far as the eye can see. We think of it as “Normal” because it’s been done regularly for so many years, but bare soil is not normal. Nature never designed itself to be tilled and left to burn in the sun. The plants that cover the ground are meant to be there to protect, build, and nourish the living soil. Think about your own skin as an example, how does it feel when it is exposed to the hot sun after being scrapped or cut open? Soil did not evolve to be exposed. Using Cover Crops, in combination with other regenerative practices, creates conditions where soils can regenerate themselves instead of eroding and/or desertifying.

Sadly, we haven’t even scratched the surface. But, there is hope when we go beyond degeneration, beyond sustainability, and look through a new lens of regeneration. Stay tuned to learn more about regenerative agricultural practices and the ways you can support them through your thinking, your purchases, your voice and your actions.